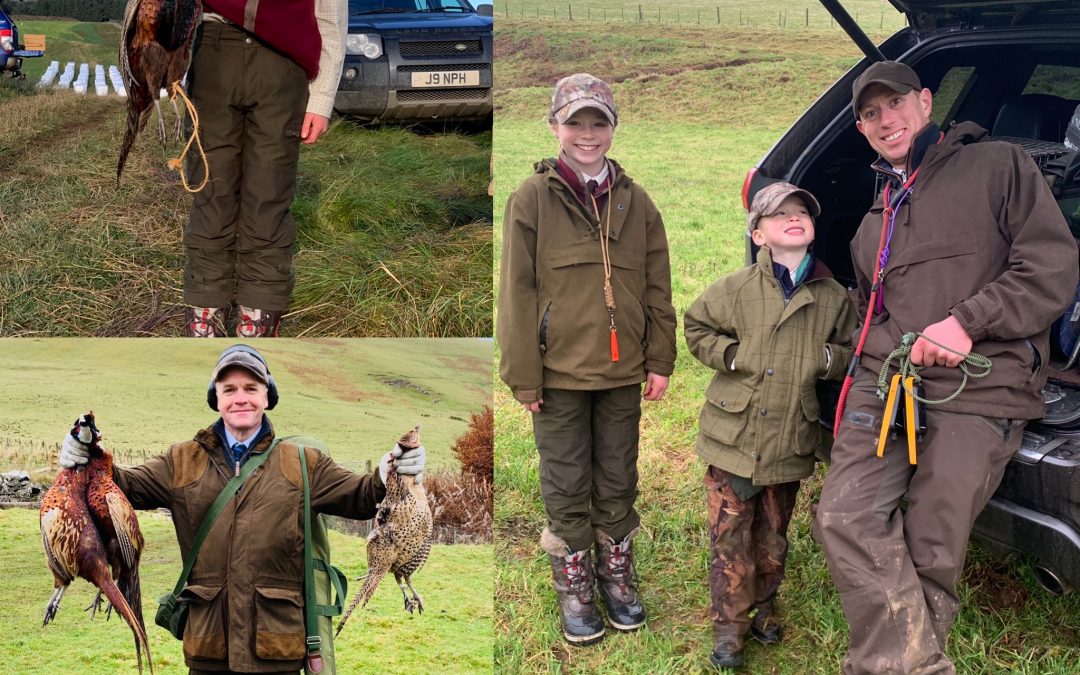 As many of you will know, I am also a shooting Coach. I launched my Shooting School ‘Frock Stock and Barrel‘ in the South East of England some 16 years ago. Before that, I commuted into London every day and was in the Advertising and Marketing industry.

Stuart and I took over the ‘Roxburghe Shooting School‘ (just outside of Kelso) on 1st Sept 2015 and made a great deal of improvements to the overall offering, with new infrastructure and all our equipment that we brought up from Frock Stock and Barrel. We specialise in clay shooting lessons on all the disciplines as well as game shooting.

Nothing gives me greater pleasure than seeing a newbie break their first flying target with a shotgun, because I taught them well. Similarly, I also derive great pleasure when a client shoots his/her first gamebird safely and competently because of my preparation, instruction and guidance.

This is why I created my own ‘training courses‘ for people that want to experience their first time out on gamebirds or deer stalking.

I am a real ‘stickler’ for people being introduced into the world of Game in the correct way with the proven methods and complete respect for what is about to give up it’s life by your hand.

To that end, a few weeks ago, we had a shoot day and one of the Guns that I know personally, asked if his daughter could accompany him, maybe pick up for him on the peg. Of course I agreed, I always encourage youngsters to shoot and understand how their food is harvested.

Better than that, his 9 year old daughter has been having some shooting lessons and he wondered whether she would be able to have a shot or 2 with her own gun. We had a conversation regarding safety and I readily agreed that she should definitely have a chance to shoot.

So on the day, not only did this 9 year old young lady have a few shots, with Dad minding her, she brought down some fabulous pheasants and speedy partridge with her .410! That’s more than some of us seasoned shooters could manage with a shotgun that has a bore the size of a gnats whatsit!

I was so made up for her, what she must have experienced that day will stay with her for the rest of her life as her first entry into the amazing world of game shooting. Not only that but they were offered more than their fair share of the bag and they sent me a video where the young lady prepped and cooked it too!

They have since joined us on another shoot day where they offered their beating services and the youngest of the Family at 6 1/2 joined us too! What a truly fantastic introduction into this world!

On yesterday’s shoot, we also had a couple of newbies but at ‘last minute’ notice. I would like to make this very clear, I do not condone a live game day as fair practice on my gamebirds. Given a notice period, I would have taken both for game shooting lessons and preparation but I was not given the opportunity.

Instead, I stood with one of the newbies for all bar the last drive (as he was doing so well) and the other Gun shared a peg with his newbie pal (after strict safety instructions from me and keeping an eye on them).

Both Guns had birds over them and both managed some nice shooting, adding their own birds to the bag and all were safe and extremely happy!

As I said earlier, live game shooting should NOT be practice for a newbie to game, it is unfair on the hosts and the game birds and (my own feeling is) it’s disrespectful. If one has the honour of being invited on a game day, then they and the invitee should always ensure enough time for them to prepare themselves with lessons from a pro game coach and ask the said coach or hosts to arrange a preferred coach/minder to accompany them on the peg.

These are my personal thoughts, some may disagree as we all lead busy lives and some people just have absolutely no time to prepare.